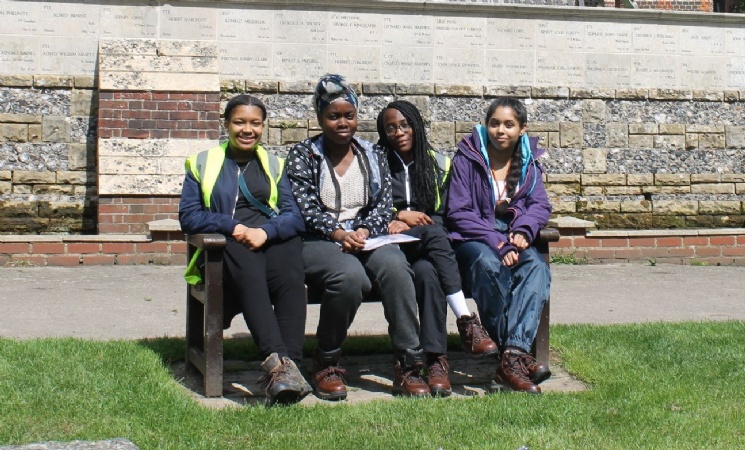 On Friday May 19th, a group of 27 Year 10 pupils collected their expedition kit and equipment in preparation for the practice Duke of Edinburgh, Bronze Award expedition.

At the start on Saturday, teams were sent off from 11.00hrs in 10 minute intervals. Each team was given the instruction to make their way West through 5 checkpoints. Ms Chen, and Mr Baines walked with two of the groups and Ms Green and Ms Cottard were placed at checkpoints along the route. All groups did well between checkpoints 1-3 however some of the teams found navigation a challenge and got a little lost! After some walking in circles, the teams were put on the right track and eventually found Frylands Scout camp at around 18.00hrs where they pitched their tents and began to cook their evening meals. A lesson learnt!

That evening, we sat around a campfire and toasted marshmallows and told a few stories before we settled down in our tents for the evening.

Sunday morning at 07.00hrs, we woke the students up with 7 loud blasts on the minibuses horn; the teams then made breakfast and packed away all tents and equipment. After breakfast they went off again for the return leg; all teams made good headway in the hot sun – in fact, by the time they reached the finish, they were quicker than they had been on the first day!

At the finish, 3 pupils were treated to the VIP treatment and went back to school by limousine, courtesy of Ms Green’s husband. The others crammed onto the minibuses. I have never seen Year 10 pupils fall asleep so quickly! They had covered close to 15 miles over the 2 days working well together in many aspects of the expedition however most will need to work on a few areas for the Qualifying Expedition in June. When the feet and shoulders have stopped feeling sore, all pupils should feel proud of their achievements this weekend. Thank you also to the staff leaders who gave up their weekends to help out.