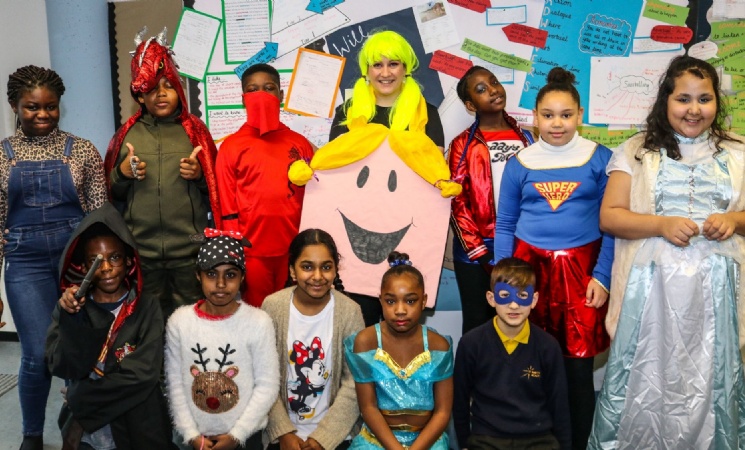 From Monday 2nd-Friday 6th March, we celebrated World Book Week in the Secondary part of the school. Several events took place on World Book Day (which was on Thursday 5th March) but also throughout the week.

Pupils who were ‘caught reading’ around the school in the week were entered into a prize draw to win some prizes and we also had some keen readers ‘guess the book and author’ in the LRC for the chance to win some prizes. The LRC displayed a range of ‘mystery’ books under the title ‘Don’t judge a book by its cover’. These books were wrapped up and labelled with just a few hints about the themes in each one; staff and students alike were able to choose a book from the selection and encouraged to read something they may not have picked up otherwise.

On World Book Day some pupils in Years 7 and 8 took part in an inter-house competition, ‘pitching’ a book they had recently read to three staff judges (who were acting as potential booksellers for the event!). Staff also had the opportunity to dress up on the day and there were some fantastic costumes. The first lesson of the day was also dedicated to reading and taking part in a quiz all about books and authors.

One of the main highlights of the week was having the author Muhammad Khan visit the school. In the morning, he spoke to Years 8 and 9 about the books he has written. He also ran some creative writing workshops in the afternoon with some Year 7 and 10 students. All pupils involved really enjoyed the talks and sessions.

Pupils have until Sunday 29th March to spend the book tokens that were given to them during World Book Week.